Joint mission to Turkey – A clear signal of unions solidarity! 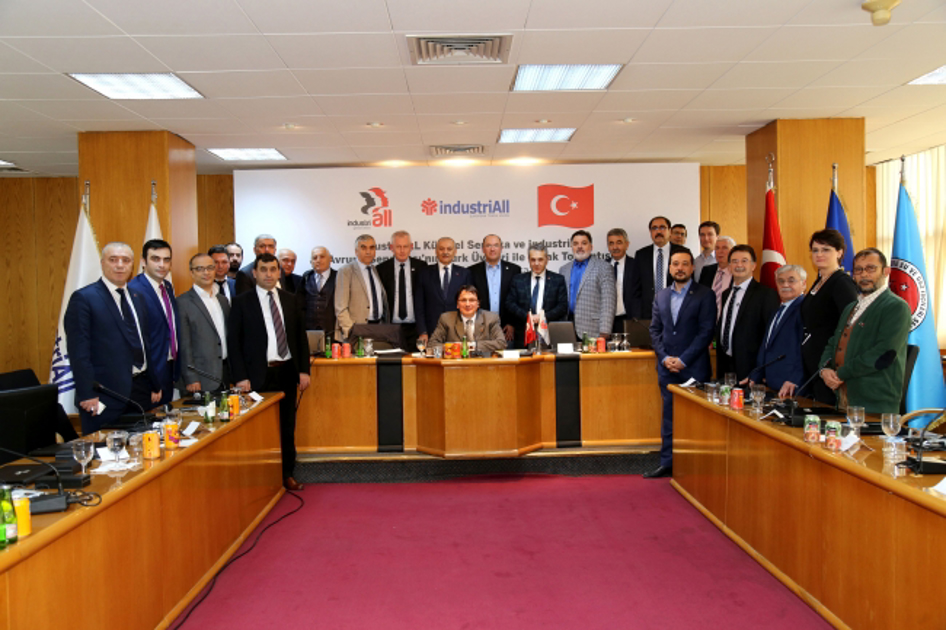 The joint meeting held in Ankara by IndustriAll Europe and IndustriALL Global together with 19 Turkish trade unions, sent a clear signal of international solidarity for Turkish unions and workers. As Europe was celebrated its 60th Anniversary of the Treaty of Rome, the unions discussed the current political and trade union developments in Turkey to reflect on the future. The meeting welcomed the idea of specific missions in the near future, with the involvement of different unions in Europe as well as from other parts of the world, which will send a clear signal of solidarity with Turkish unions and workers.

Cooperation between the Turkish unions and the European trade unions is very important for the respect ﻿﻿of fundamental rights, and especially the freedom of association for the common interests of Turkish workers and European workers.

After the failed coup attempt on 15 July 2016, Turkey has been in a continuing state of emergency with limitations and restrictions on fundamental rights. The joint union meeting came just before a constitutional referendum to be held on 16 April, proposing a change from a parliamentarian to a presidential system. Unions and Turkish society in general, have different views on the possible consequences of a change.

A recent change in labour legislation, despite firm opposition by the trade unions, gives companies a legal right to hire temporary workers from private employment agencies, making it more difficult for unions to recruit new members. The meeting identified a compulsory private life insurance system and changes in the labour court systems as new challenges for the union movement in Turkey. The unions also signaled that the government is preparing to attack severance payments.

The massive influx of refugees, particularly from Syria, poses a challenge on the economic, social and labour levels. The textile, garment and leather sectors are heavily affected through an increased informal economy in the industries. “Turkey has historical economic and political ties with Europe,” stated Luc Triangle, General Secretary of industriAll European Trade Union. “Cooperation between the Turkish unions and the European trade unions is very important for the respect ﻿﻿of fundamental rights, and especially the freedom of association for the common interests of Turkish workers and European workers.”

“Turkey is one of our priority countries,” said Valter Sanches, General Secretary of IndustriALL Global Union. “With its level of industry and proximity to other regions, developments in democracy and fundamental rights in Turkey are of critical importance for the global union movement. Our solidarity and support for our affiliates will continue.”

“At this point, I believe that the only structure that can repair the fragile bridge between Turkey, the European Union and the world, is the international trade union movement and labour solidarity.” said Mustafa Kumlu, President of Turkish Energy, Gas and Water Workers’ Union.

IndustriAll Europe, IndustriALL Global, and Trade Unions in Turkey all brought into play their ability to rise together in solidarity to overcome the series of both political and economic issues they are facing. The trade unions representatives’ concluded by discussing common initiatives and actions to be carried out in the next period to strengthen relations and ties, especially between Turkey and Europe.

IndustriAll European Trade Union represents the voice of 7 million working men and women across supply  chains in manufacturing, mining and energy sectors across Europe. We aim to protect and advance the rights of the workers. Our federation has  177 trade union affiliates in 38 European countries. Our objective is to be a powerful player in the European political arena vis-à-vis European companies, European industries, employers’ associations and European institutions.