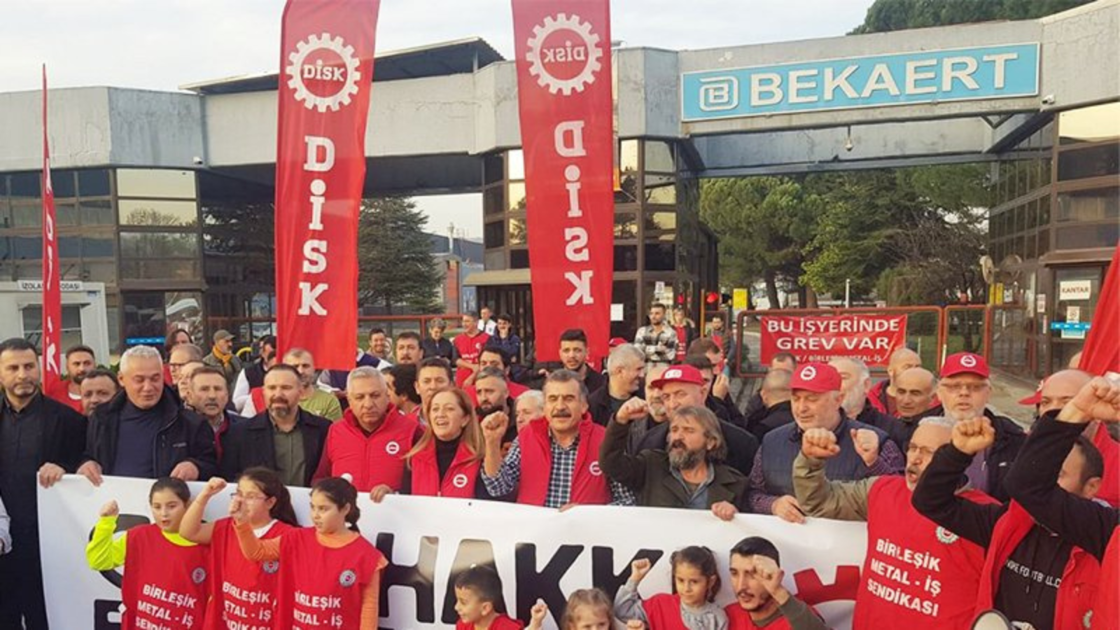 After an 18 day strike action in Izmit Turkey, workers at the Bekaert factory demanded a fair wage increase due to inflation rates and have achieved an 84 per cent pay rise.

After striking for 18 days, workers at Bekaert in Izmit, Turkey, have achieved an astounding 84 percent pay rise.

The successful achievement is the result of strike action that started on 22 December last year, when 400 workers stood in front of the Bekaert factory demanding a fair wage increase to compensate the skyrocketing inflation in Turkey.

After a long strike with support from trade unions across Europe, as well as industriAll Europe and IndustriALL Global, Bekaert agreed to grant its workers a pay rise of 84.83 percent on average for a duration of six months. In the following six months there will be an increase in the inflation rate plus 2 percent. Bekaert has agreed to not cut the wages of the workers who participated in the strike.

Over the last years, inflation in Turkey has skyrocketed, resulting in a huge decline in workers’ purchasing power with wages far from enough to make ends meet. Bekaert refused to give its workers a fair wage increase. Fully within their legal rights, workers at the Bekaert factory in Izmit, represented by Birleşik Metal İş, called a strike on 13 December after negotiations on a collective bargaining agreement failed.

However, President Erdoğan issued a decree citing national security concerns, forcing the strike to be postponed for 60 days. It is assumed that the decree was initiated by Bekaert management. The postponement of the strike is tantamount to a ban. Birlesik Metal-Is and the workers rejected the ban and continued to strike.

Trade unions from across Europe and opposition politicians in Turkey condemned the ban while expressing support for Birleşik Metal-İş and congratulating the workers on their determination to stage the strike despite Erdoğan’s decision A determination which brought a 84 percent wage increase in the collective agreement, backdated to September 2022 for a six-month period. In March this year, there will be another increase in line with the six-month official inflation rate plus 2 percent.

“This a great result that compensates the unreasonably high inflation in Turkey. It is also time that politicians put in place adequate policies to tackle inflation and increase purchasing power to decrease the level of poverty among ordinary people. Once again, we condemn the decision to deny workers their fundamental right to strike. We congratulate workers at the Bekaert factory in Izmit, represented by Birleşik Metal İş on their huge success”

“We congratulate the workers and their union on standing up against an employer trying to avoid responsibility and going on strike, fully in accordance with the law, and achieving such a significant union win. The determined and concerted action by Bekaert workers is an excellent example of what the working class throughout the world should do at a time when wage earners are losing purchasing power. The world needs a significant pay rise immediately”