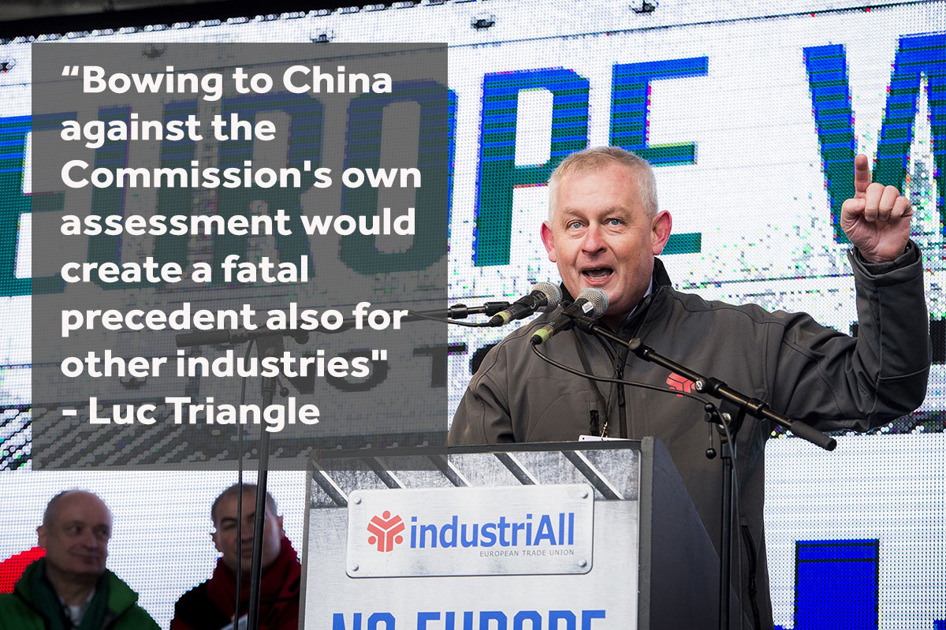 At a time where EU credibility is at stake, industriAll European Trade Union is very concerned about the state of the anti-dumping measures on solar photovoltaic imports from China. Since 2013, the measure allowed the EU photovoltaics industry to invest and recover from unfair trade practices. Jobs saved by the measures are now in danger once more. The European Commission’s original proposal of a two-year extension could be shortened to only 18 months after which the measure would expire completely. This EU Trade Policy move could hand over a key European industry to Chinese market overcapacities in the near future.

Bowing to China against the Commission's own assessment would create a fatal precedent, also for other industries (Luc Triangle)

The original proposal last week by the Trade Defence Committee, which industriAll Europe supports, was opposed mainly by member states that do not stand to lose industrial sites and jobs. In addition, these members do not reach a qualified majority as they merely represent one third of the entire European population.

The European solar industry has been a frontrunner in advancing industry’s contribution in increasing the use of renewable energy sources for many years now and it has built well-developed infrastructure spanning from R&D to production to installation and servicing of panels. Many jobs are dependent on the continued existence of this sector in the EU. Shortening the anti-dumping measure to 18 months would seriously damage the outlook for this sector and discourage much needed investments.

IndustriAll Europe stresses the fact that this sector is highly relied on for jobs and investment, in addition to playing a major role in helping Europe reach its CO2 targets and revitalising European industry. As the Commission is currently revamping its anti-dumping tools and is steadily becoming more ambitious with regard to installing increasing RES capacities throughout Europe, a decision to expose this key technology to unfair competition would be counterproductive, creating many future obstacles for EU Trade Policy.