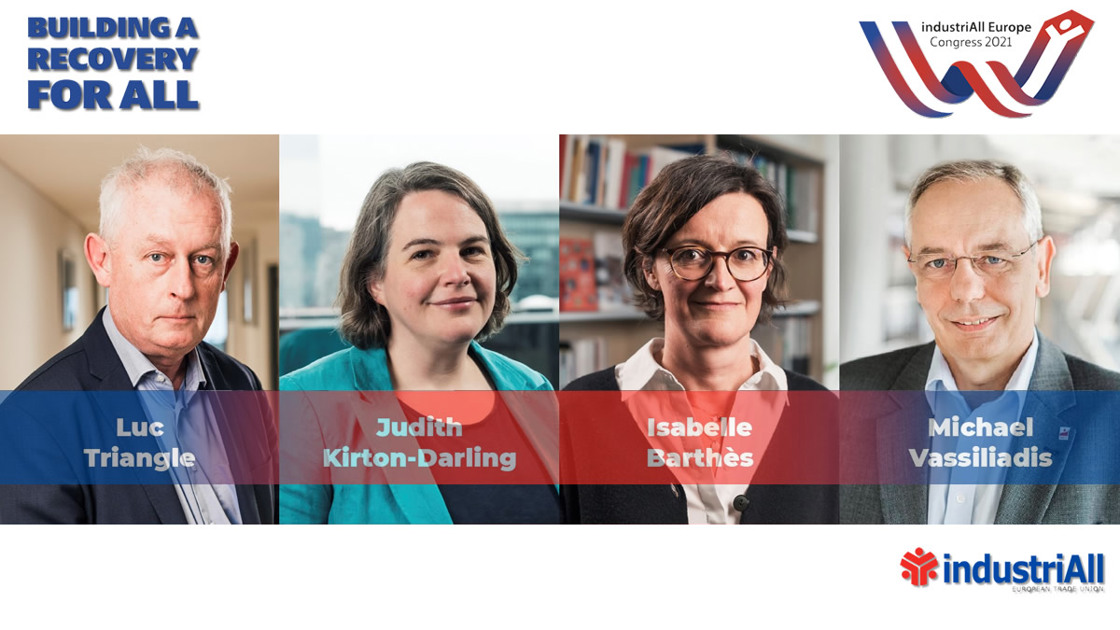 Luc Triangle has held the post of industriAll Europe General Secretary since 2016 and before that the position of Deputy General Secretary between 2012-2016. Prior to this, he was the General Secretary of the European Federation of Textiles, Clothing and Leather (2011-2012) and earlier held various positions in the Belgian ACV Metalworkers’ Trade Union.

Isabelle Barthès joined the European Metalworkers’ Federation (EMF) in 1996. At EMF and later as a senior policy adviser of industriAll Europe, she was responsible for a range of key policy areas, notably company policy as well as collective bargaining and social policy. In July 2020, Isabelle was appointed Deputy General Secretary of industriAll Europe by the organisation’s Executive Committee.

Judith Kirton-Darling was a British Member of the European Parliament for the North East of England (2014-2020). Prior to this, she was active within the Labour and trade union movement. Notably she was elected Confederal Secretary at the European Trade Union Confederation in 2011 and earlier also worked for the European Mine, Chemical and Energy Workers’ Federation (EMCEF) and the EMF. In July 2020, she was appointed Deputy General Secretary of industriAll Europe by the organisation’s Executive Committee.

Michael Vassiliadis is the President of the German Industrial Union of Mining, Chemical and Energy (IG BCE). Michael has held the elected post of industriAll Europe President since 2012.

“IndustriAll Europe and its 180 member organisations represent nearly 7 million workers. Together we will continue on the path towards greater solidarity and joint action. A strong, united voice for workers and trade unions is now more important than ever. The green transition and digitalisation can only be achieved with our involvement and this requires good social dialogue, strong collective agreements and meaningful workers' involvement. The next years will be challenging for European industrial workers. We will fight for quality jobs, fair wages and a transition where no one is left behind.”

“Rapid change will continue to impact our lives, jobs and working environments in the coming years. There are many opportunities ahead of us, but also challenges, with rising inequalities between people and regions in Europe at the centre. A wind of change is blowing through Europe with a narrative advocating for a more social Europe. We will use this momentum to push for stronger rights for workers, and more and quality jobs. Strengthening collective bargaining and social dialogue will be our compass.”

“Our movement is built on the core principles of collectivism and solidarity. They are the bedrock of our European trade union work. Multinational companies and opportunistic governments will not hesitate to exploit and deepen divisions in their desire to drive down costs and labour standards. As a European trade union movement, we will respond to this by redoubling our efforts to deepen and strengthen solidarity and cooperation between workers across Europe. To deliver a recovery for all, we need to be proactive in how we organise ourselves to strengthen the workers’ voice, from the shopfloor to the boardroom.”

"The ecological transformation is a great challenge for Europe and at the same time can be the boost for the future if it is shaped socially," said Vassiliadis with a view to the coming years. "In order to raise the opportunities for workers, we need strong trade unions." However, he said, European policy often lacks how the goals should be achieved in concrete terms to ensure social balance. "Europe is at a crossroads. Either it will be an era of sustainability, new investments and innovations or a phase of social and economic crisis," said Vassiliadis. The industrial trade unions are at the centre of this debate: "We have a special responsibility and the power to shape the protection and future opportunities of workers in our sectors.”