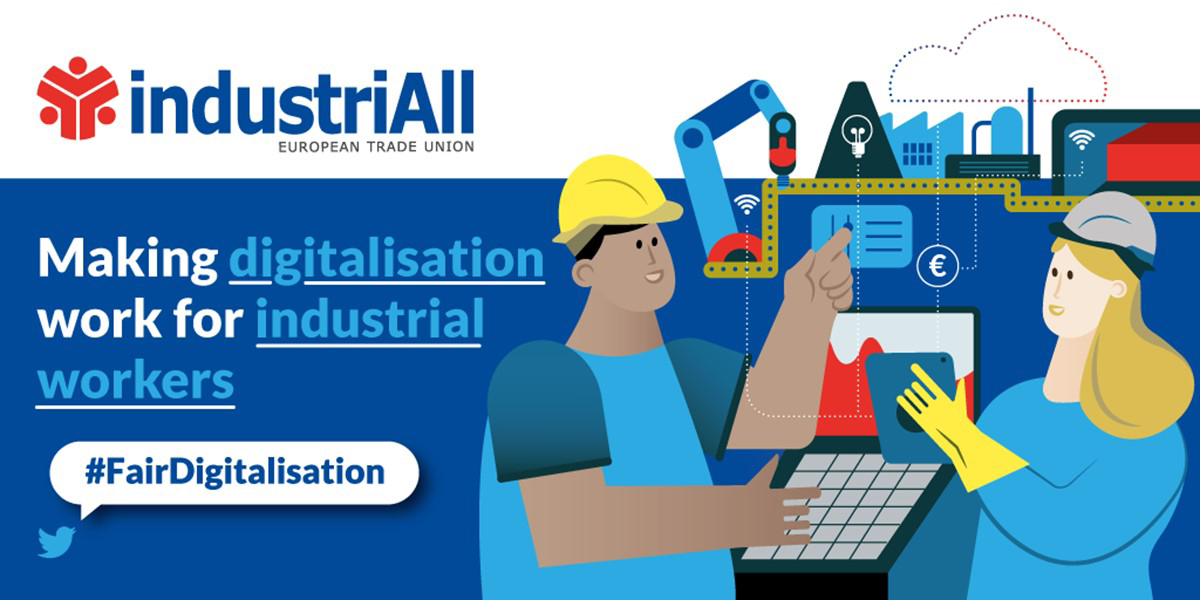 Recovery must help bridge digitalisation gaps between countries, and workers must see the benefits of digitalisation, concludes industriAll Europe after the first two webinars in its #FairDigitalisation series.

Social dialogue must ensure that investments are flowing in the right direction. It must guarantee a fair digitalisation that benefits workers, including a recognised right to disconnect and a fair share of the productivity gains for workers.

The research findings were presented during the first two webinars in a series of regional workshops* that are part of an EU-funded project analysing the impact of digitalisation in our sectors. The scope of the project was enlarged to include an analysis of the current crisis on the digital transformation of our sectors.

The project is expected to give a full and up-to-date picture of the effects of digitalisation in our sectors on production patterns and productivity, work organisation, working conditions, training and skills. The potential role of trade unions in ensuring a fair digital transformation takes centre stage of the project. The research was conducted by the consulting firms Syndex and wmp consult and was based on a literature review, as well as in-depth expert interviews.

The opposing trends in the digitalisation of industry between the South and Centre-East regions, caused by the pandemic, are very worrying. They will widen an already existing gap in Europe. In countries such as France, that already had advanced levels of digitalisation, the transformation is accelerating further, with highly automated and robotised plants. On the other hand, in countries like Romania, that were previously lagging, digitalisation appears to have stopped.

Upward wage convergence and investment will boost digitalisation
A major reason cited for the increasingly diverging levels of digitalisation are wage gaps. If wages are expected to stay low, companies in Central and Eastern Europe have little or no incentive to invest in costly, highly automated and robotised digital technologies. Furthermore, given the absence of national digitalisation strategies in Central and Eastern Europe, the decisions to digitalise rest with these companies alone. The funds earmarked for digitalisation in the European Recovery and Resilience Fund (RRF) will therefore make no difference if there are reasonable doubts that they will be employed. Policymakers must ensure that RRF funds are directed to fulfil their actual purpose.

For industriAll Europe, the most efficient remedy is upward wage convergence across Europe, as this will ultimately also boost the digital transformation of industries everywhere, making Europe more competitive on the global market.

A high degree of digitalisation does not necessarily benefit workers. In Southern countries, where COVID-19 has accelerated digital transformation, research and trade union reports reveal high degrees of work intensification and work increase. Workers received extra tasks and were forced to work longer hours, as part of the massive push towards telework. Increased productivity, combined with big cost savings, is now leading many companies to consider permanent forms of telework. IndustriAll Europe highlights the negative consequences of imposed and permanent telework, including the impact on workers’ health, in its recently adopted position paper.

Research findings in the Southern region also revealed that a high degree of digitalisation makes companies more resilient and this is particularly relevant in the context of a pandemic. IndustriAll Europe recognises the value of digitalisation for industry and calls for a fair digital transformation that also benefits workers.

The EU Social Partners Framework Agreement on Digitalisation is a first step in ensuring a human-centred, ethical and just digital transformation. This Agreement must now be implemented at all levels and, to this end, we call on employers to take a seat at the bargaining table across Europe.

Isabelle Barthès, Deputy Secretary General of industriAll Europe:
“Our webinars have shown once again that COVID-19 tends to deepen already existing inequalities in Europe, and this includes the digital transformation of industry. We need strong social dialogue and collective bargaining at all levels, from European to national, sectoral and company levels, to handle the impact of COVID-19 on digitalisation. Social dialogue must ensure that investments are flowing in the right direction. It must guarantee a fair digitalisation that benefits workers, including a recognised right to disconnect and a fair share of the productivity gains for workers.”