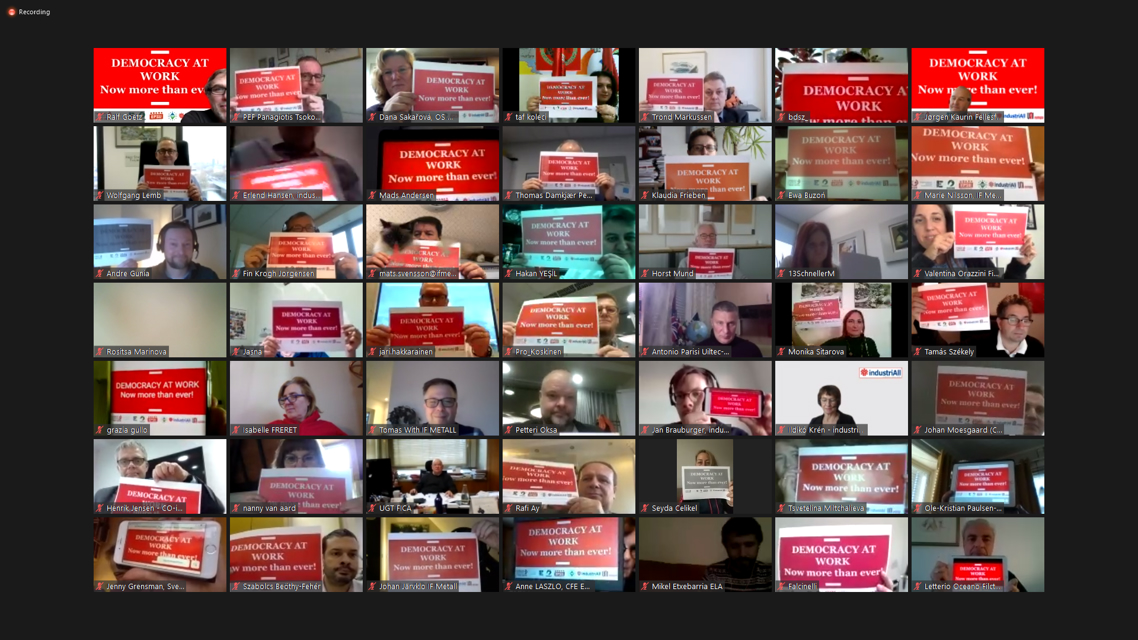 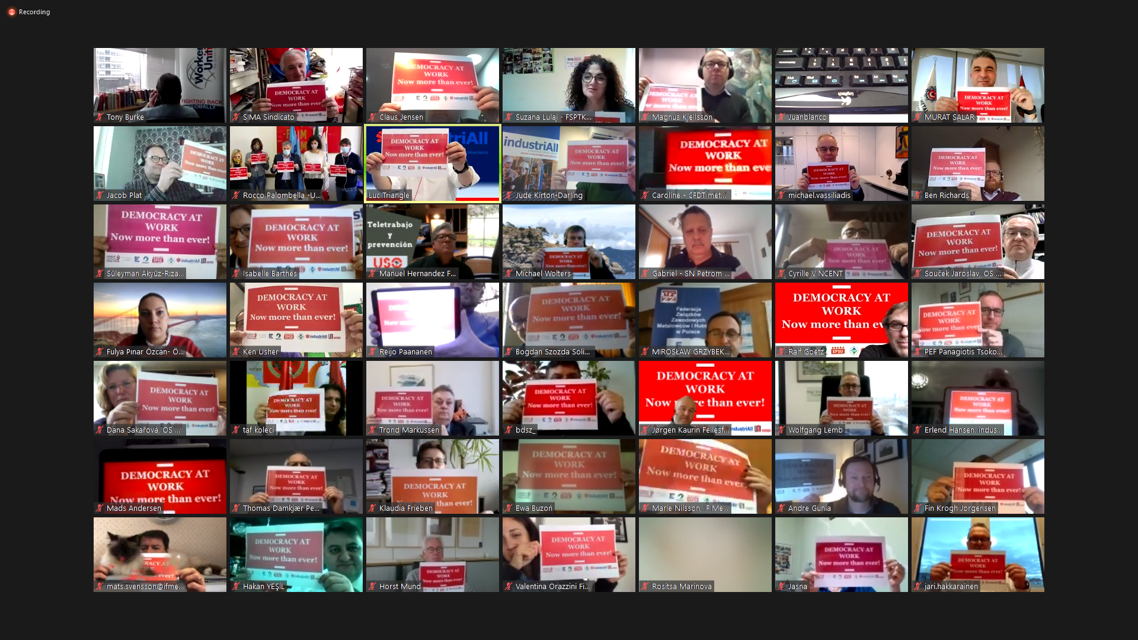 As massive job cuts are announced across Europe, and industries face the twin challenge of the green and digital transitions, industriAll Europe, the European Trade Union Federations and the ETUC hand a petition to MEPs calling for action to secure better worker involvement in company decisions.

There must be no decision on our jobs without us!

Today, industriAll Europe together with the European Trade Union Federations UNI Europa, EFFAT, EPSU, EFBWW, ETF as well as the ETUC handed the petition “More Democracy at Work is a must” to Members of the European Parliament at an online event which gathered over 100 participants.

The petition had been launched this fall and counts more than 2,500 trade union signatories. Around 150 trade union leaders that met at industriAll Europe’s Executive Committee yesterday, joined the call to EU policymakers to act and make social dialogue a reality at the workplace.

No single day passes without the announcement of massive job cut plans. IBM (10,000 job cuts), thyssenkrupp (11,000 positions worldwide), Continental (30,000 jobs worldwide), Renault (15,000 job cuts), Airbus (15,000 jobs), Rolls-Royce (9,000 jobs), GE aviation (10,000 jobs) are examples of a very worrying trend. More large-scale restructuring is on the horizon in companies that have not yet announced total layoff figures. Daimler, for example, plans to cut fixed costs by more than 20% by 2025 and General Electric has announced the restructuring of its energy activities, including renewable and steam businesses.

Most worrying is that these announcements are only the tip of the iceberg. The restructuring in multinational companies has started to spill over to suppliers and subcontractors. Combined with the digital and green transformations of European industries, millions of jobs are about to change if not to simply disappear in Europe in the coming months.

Trade unions insist that an inclusive recovery and just transitions can only be achieved if workers and their representatives have their say before companies take decisions which may impact workers’ health, working conditions, income and jobs. A European legal framework is in place that should guarantee the fundamental right to be informed, consulted and to negotiate with company management before such decisions are made.

And yet, violations of our rights are increasingly becoming the norm. Local and national trade union representatives and works councils are too often confronted with a fait accompli, learning of job cuts or plant closures in the press. Too many companies are using the current travel bans and social distancing requirements as an excuse to call off dialogue, cancelling meetings of their national or European works councils. Restructuring plans are devised without worker and trade union involvement.

For years, the European trade unions have called on the EU and national governments to ensure greater respect of our rights by multinational companies as well as the legal enforcement of rights. Today’s action underlines the resolve of European trade unions to continue this fight until decisions on our jobs are no longer made without us.

“Time is up for nice talks and for handling multinational companies with velvet gloves. We have had enough soft measures like handbooks of so-called ‘good’ practices and cannot be satisfied with EU politicians listing EU laws on worker participation. Those EU laws exist only on paper if neither the European Commission, nor the European Parliament, nor the Member States make them real and effective.”

“It is now time for the EU institutions to affirm publicly that breaches of rights stemming from EU law will no longer be accepted. It is time for the European Commission to propose concrete binding initiatives to enforce our information, consultation and participation rights. It is time for the European Parliament to commit making democracy at work a reality. It is time for Member States to ensure effective, proportionate and dissuasive sanctions are in place when social dialogue is breached, and that worker representatives are able to claim their rights before courts. There must be no decision on our jobs without us!”