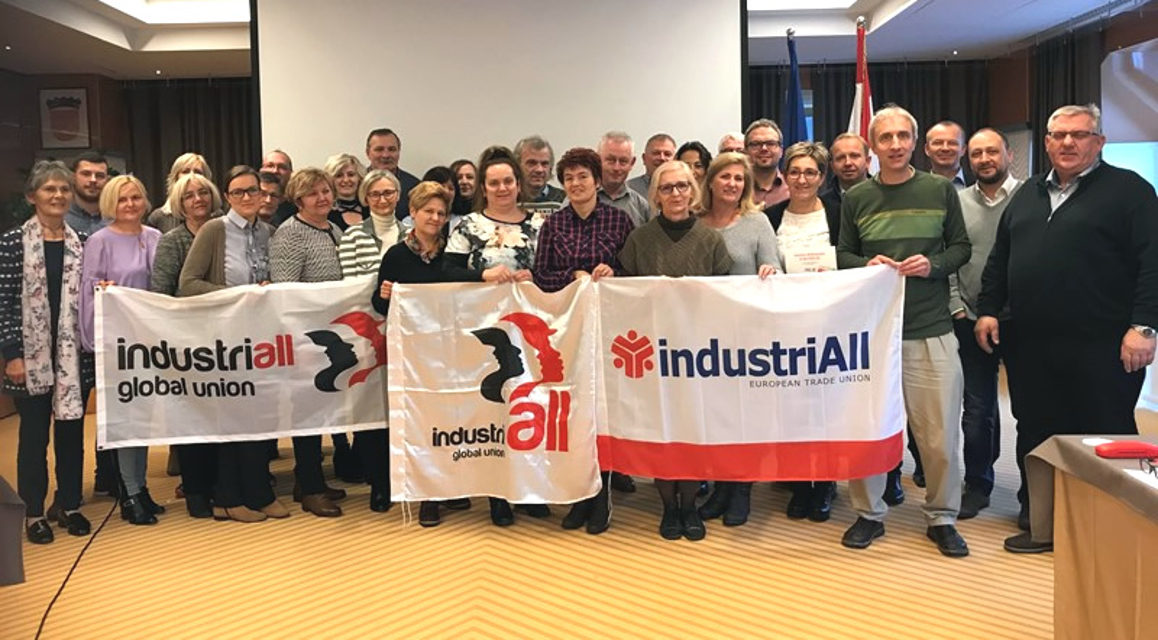 At a seminar on 3-4 December 2018 in Zagreb, unions from three countries agreed to cooperate on organising and collective bargaining in Austrian-owned leather companies in Croatia and Slovenia. On the second day, national and local union representatives were joined by the Croatian government, employers and institutes on technology and vocational training to discuss how to work together on developing a thriving textile-leather industry with a qualified workforce, industry-level collective agreement and living wages.

The national seminar was part of an EU-funded project under the title “Strengthening the capacity of trade unions in South-East Europe to improve wages and working conditions in the garment and footwear sectors”, carried out in cooperation between industriAll Europe and IndustriALL Global Union. The project targets seven countries in the region: Albania, Bulgaria, Croatia, Macedonia, Montenegro, Romania and Serbia.
Austrian investment in Croatia is considerable. Therefore, on the first day of the seminar, a session was dedicated to concrete cooperation on organising workers and reaching collective agreements at major factories of Austrian leather processing companies Boxmark and Wollsdorf, which together employ more than 3,500 workers in Croatia and almost 2,000 in Slovenia.

Austrian and Slovenian national and local level representatives of Boxmark and Wollsdorf attended the seminar and agreed on the follow-up.
“We took important steps today on concrete cross-border cooperation to increase union density and reach collective agreements”, said Gerald Kreuzer of Austrian industrial and commercial union Pro-Ge, who together with his colleagues presented a case study on organising in Austria. This was followed by training on organising techniques and the use of global framework agreements (GFA). Both Austrian companies are suppliers to GFA partner companies Daimler, BMW, PSA, Renault and VW.

Croatia´s textile, garment and leathers industries employ 24,000 workers, which is considerably less than in some other South-East European countries such as Romania or Bulgaria.

The minimum wage in Croatia is 462 euros per month, increasing again by 9 percent in 2019. Average monthly net wages in the textile and leader sectors are around 530 euros. This is a clearly higher level than in the neighbouring countries, prompting Croatia to try to compete with other means such as a highly skilled workforce, innovation, new technologies, and high value-added products.

A Croatian speciality is the Faculty of Textile Technology which focuses on education and research on innovative technologies, automation and Industry 4.0. Every year 200 students graduate and everybody will get a job. However, many of the recent top students have left Croatia for careers with better pay in Sweden, Germany, France and even China.

“We have to find ways to keep people in Croatia”, said professor Dubravko Rogale. “Minimum wage hikes and general salary increases may encourage employers to take an interest in their workers.”

Danijela Pustahija Musulin from the Agency on Vocational Education and Training (ASOO) was on the same line: “Employers have to see their workers as an investment and not cost factors. There are growth opportunities in the sector, but we need to attract young people and offer them skills and new competencies”.

Nenad Leček, President of the textile workers´ union TOKG, confirmed that his union was a partner for cooperation to make the sector thrive, but there was a need to do more to get rid of the bad image of the textile and leather sector.

“We have to focus on wages which today are below a decent level, while foreign companies are making huge profits. We need a sectoral collective agreement to offer protection for workers and a more level playing field for companies”, insisted Leček.

Ana Falak, Director of the Textile and Leather Association of the HUP employer organisation, was open for continued dialogue with TOKG: “We have discussed a branch collective agreement and have not found major obstacles, as many companies already have local CBAs. There are good experiences from the construction sector, but we also need some support from the government.”

Ivana Tabak from the Ministry of Labour said the government supported social dialogue. Ante Rezo from the Ministry of Economy acknowledged the importance of the textile-leather industry which needs support, contributing also through indirect employment to keeping communities alive in many parts of the country.

IndustriALL Global Union’s Assistant General Secretary Kemal Özkan stated “The Croatian textile industry has an important development potential. But unless workers are treated with respect and properly paid for their work, they will continue to go away and deprive the country of much needed skills. Decent wages and working conditions are key to ensuring a sustainable textile industry in Croatia”.

Luc Triangle, General Secretary of industriAll European trade union, underlined the conditions for the Textile, Clothing, Leather and Footwear industry to have a future in Croatia: “In an intermediate country like Croatia, we need to invent a new development model for the textile, clothing, leather and footwear sectors, based on higher wages and better working conditions, obtained through sector collective agreements. This is the only way for the industry to attract and retain its workforce, and to maintain its long tradition of excellence. For this to happen, we need international solidarity among workers, the cooperation of big brands, and the continued pressure of NGOs on them. I call for win-win-win progress for brands, for Croatian employers and for Croatian workers”.