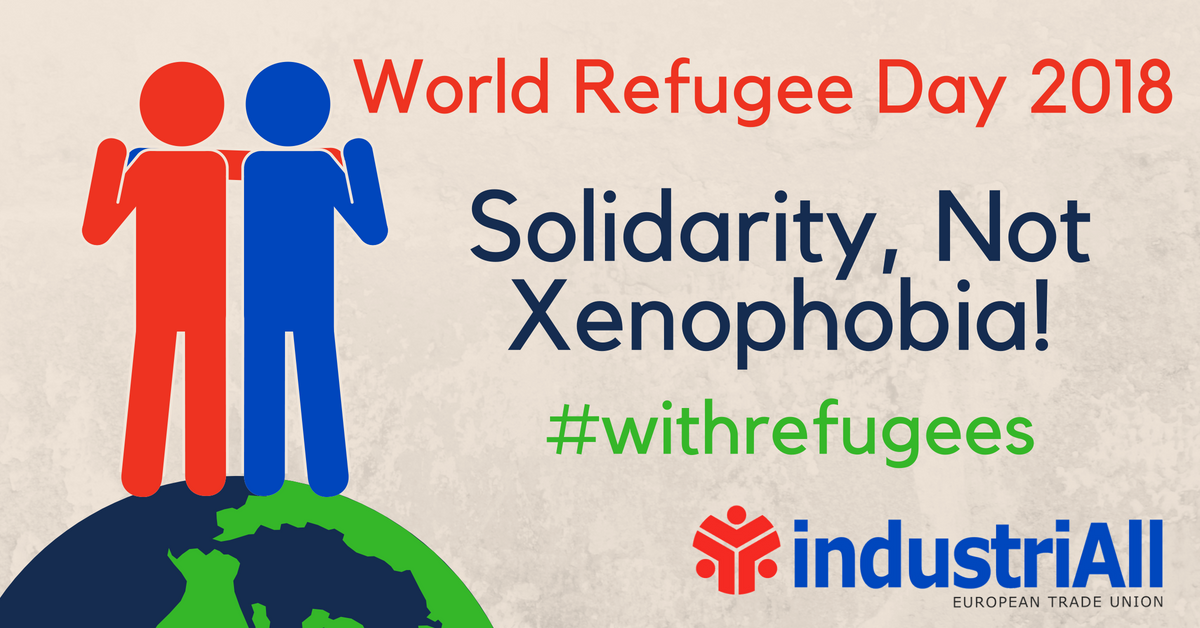 Refugees are not political bargaining chips.

On World Refugee Day, 20 June, we acknowledge the strength, courage and perseverance of millions of refugees. This year, World Refugee Day also marks a key moment for us to show support for families forced to flee.

In a world where right-wing politics, xenophobia and anti-refugee sentiments are at an all-time high, while violence simultaneously forces thousands of families to flee for their lives each day, the time has come to show that the trade union movement and European citizens stand with refugees.

The failure by European Union governments and institutions to develop an effective and rights-based policy response to migration has caused real suffering and fueled a sense of political crisis around migration.

The recent refusal of the Italian government to allow a nongovernmental rescue ship to dock at an Italian port reflects the country’s new hardline approach and willingness to flout its international obligations but also a significant breakdown in regional cooperation and solidarity.

Political tensions are high throughout the European continent, where in recent days the German governing coalition came under strain over a plan to tighten border controls.

Meanwhile, across the Atlantic, the hardline approach of the U.S. President to immigrants from Mexico has resulted in the separation of families and hundreds of children kept in cages at a facility in Texas.

On World Refugee Day, industriAll Europe stands with refugees the world over and calls on European heads of state and government to show solidarity when they meet in Brussels on 28-29 June to discuss migration and asylum policy as part of the European Council summit.

At the Executive Committee of 12 June 2018, the affiliates of industriAll Europe endorsed a statement by the Italian affiliates (FILCTEM CGIL, FIOM CGIL, FEMCA CISL, FIM CISL, FISASCAT CISL, UILTEC UIL, UILM UIL) condemning the response of the new Italian government who refused the request of the MV Aquarius, carrying some 629 people, including pregnant women and children, to dock in Italy.

IndustriAll Europe reiterates the message of a motion on refugees passed at its second Congress in Madrid, 2016:

“This situation requires a European response based on humanity, solidarity and inclusion. European trade unions know better than anyone that our societies have been built and developed thanks to ongoing cultural and ethnic diversity.
Nevertheless, the situation is unfortunately polarising society. Even if the vast majority of people in Europe are in favour of taking in and helping the refugees, xenophobic and racist parties are using the dire situation of the refugees and the uncoordinated approach by the EU and individual countries as a way to draw public attention and to exploit this for their own benefit.
IndustriAll Europe calls upon all of its affiliated organisations, their staff and their active membership in all companies across Europe to show active solidarity with refugees and to reject all forms of prejudice, racism, xenophobia and acts of violence in the strongest possible terms.”

IndustriAll Europe recognises the importance of labour market integration for refugees. Labour market integration is beneficial to refugees. The best way to achieve integration in new surroundings is through active participation in the workforce. When migrants can make a living, pay taxes and contribute to social security systems, they are an advantage to Europe’s societies and its economy. They also have a positive demographic effect and can be a source of cultural enrichment and diversity.