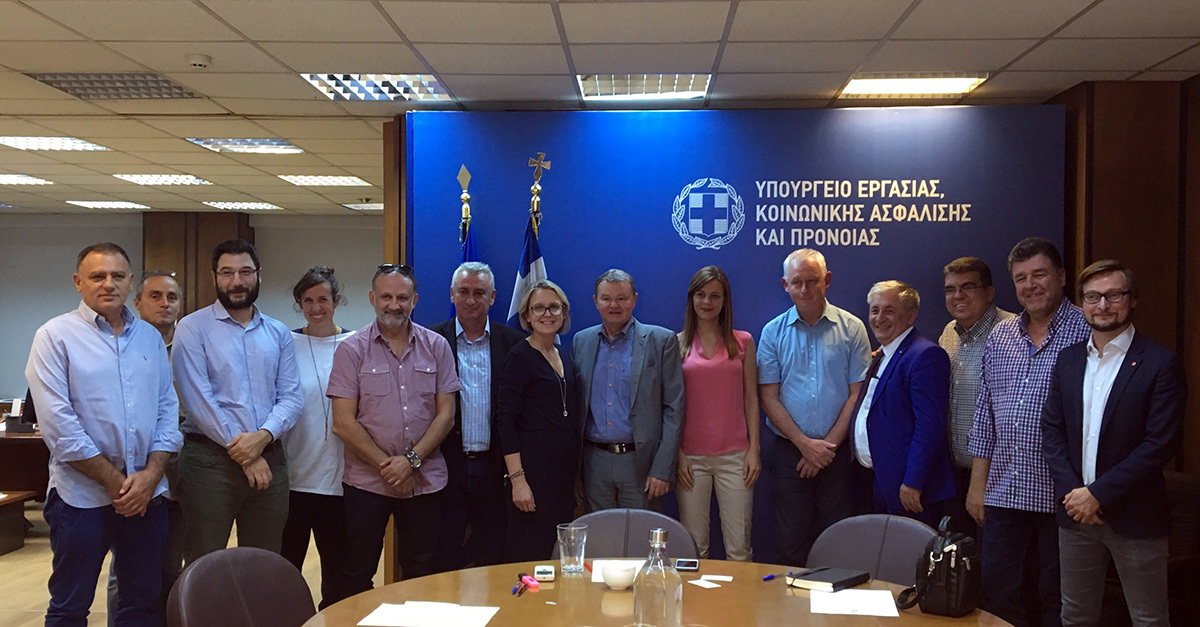 IndustriAll Europe stands side by side with its Greek affiliates in their efforts to reinstate dismantled collective bargaining structures that should allow wages to be increased and working conditions to be improved. That is one of the reasons why an industriAll Europe delegation composed of members from all European Regions traveled to Greece on 28 - 29 September 2017.

We expect that the Greek Government will reinstate a socially-minded collective bargaining system from August 2018 and we will support them in the process.

The Greek economy has suffered at the hands of unacceptable neo-liberal austerity policies for almost a decade. Jobs have been destroyed, budgets slashed, social systems dismantled, pensions lowered to a level which allows pensioners only to survive in poverty, while finding work is next to impossible. On top of this, many of those who do work still suffer from crippling in-work poverty.

For almost 8 years, sectoral collective bargaining has ceased to exist in Greece. The minimum wage has decreased to little more than €500 per month gross, while wages, in reality, can be even lower. Greece’s economy is increasingly grey, with high levels of unpaid and undeclared work. Total official unemployment rates remains at 23%, while youth unemployment affects one in every two workers under the age of 25.

Until 2010, Greece had a functioning collective bargaining system, with a strong role for the social partners in their various sectors. The system was based on two principles: the ‘extension principle’ and the ‘most advantageous’ principle. In the first instance, sectoral agreements were extended to all workers and companies in the sector. Secondly, for workers, the most favourable level of agreement (company or sector) was applicable, to the advantage of the workers. All of this disappeared through policies introduced by the Troika, (the European Central Bank, IMF and, notably, European Commission). Their austerity policies and social agenda destroyed the country by increasing poverty and creating a downward spiral, limiting workers hopes for a better future.

During the mission, the industriAll Europe delegation including all Greek Trade Unions affiliated to industriAll Europe, led by Luc Triangle, General Secretary, and Manfred Anderle, Chair of the Collective Bargaining and Social Policy Committee, had the opportunity to meet the Greek Minister of Labour, Effie Achtsioglou from the governing Syriza party. She asked the delegation to work together for better conditions for Greek people and workers. The pressure from the European Commission, and the other members of the Trojka, to keep the social system provisions and wages low is almost daily practice for the Greek government. During this meeting, the Minister of Labour also confirmed to the delegation that in August 2018 a new law will come into force that will reinstate some, but not all, of the dismantled collective bargaining structures, such as the ‘extension’ and ‘most advantageous’ principles.

IndustriAll Europe is of the opinion that this is indeed the way forward. The situation of the workers must be rebuilt by reinstating strong collective bargaining structures. We are counting on the commitment of the Greek Government that a functioning collective bargaining system will be restored in 2018 and that the Government will do its utmost to reinstate a social security system that provides sufficient benefits (i.e. pensions and other social insurance) to guarantee a decent life at every age, for all Greek citizens.

The delegation also discussed the ongoing precarious situation of refugees in Greece and visited a refugee hotspot located outside of Athens. IndustriAll Europe is of the opinion that every Member State should uphold its responsibility to share fairly the number of refugees arriving in Europe.

IndustriAll Europe, together with its Greek affiliates, will continue to focus on the social and economic developments in Greek society.

“We expect that the Greek Government will reinstate a socially-minded collective bargaining system from August 2018 and we will support them in the process.” – Luc Triangle