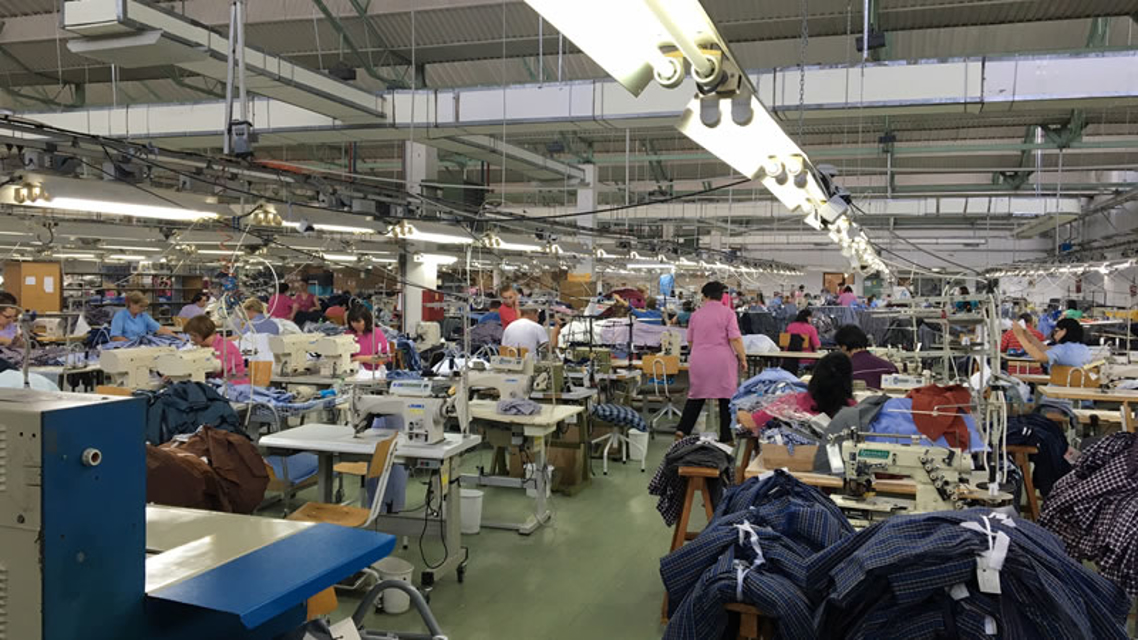 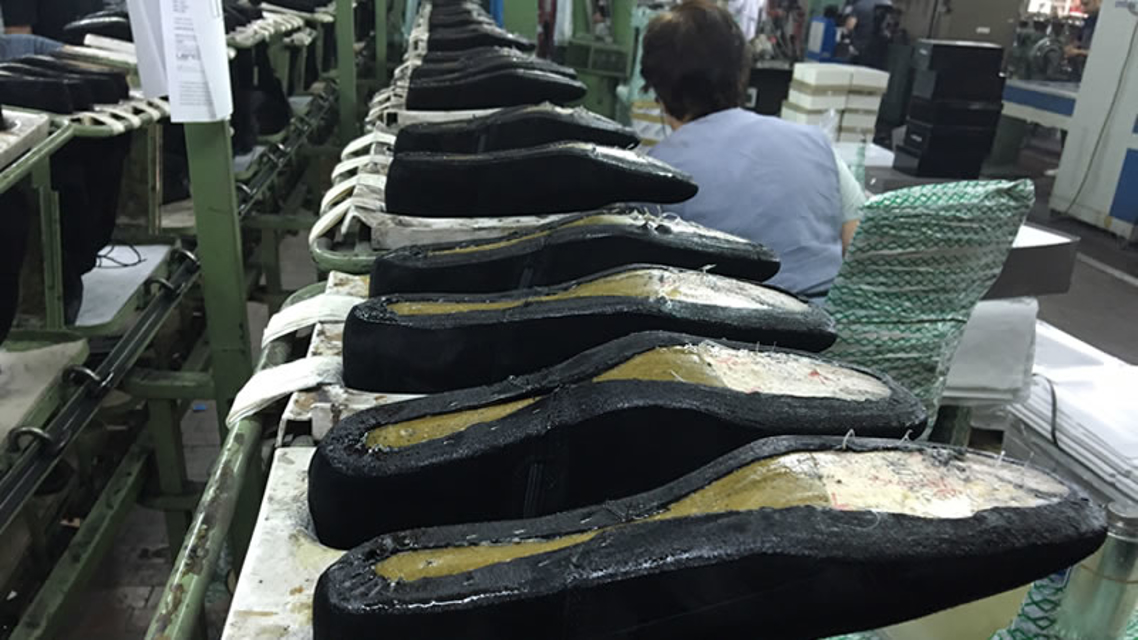 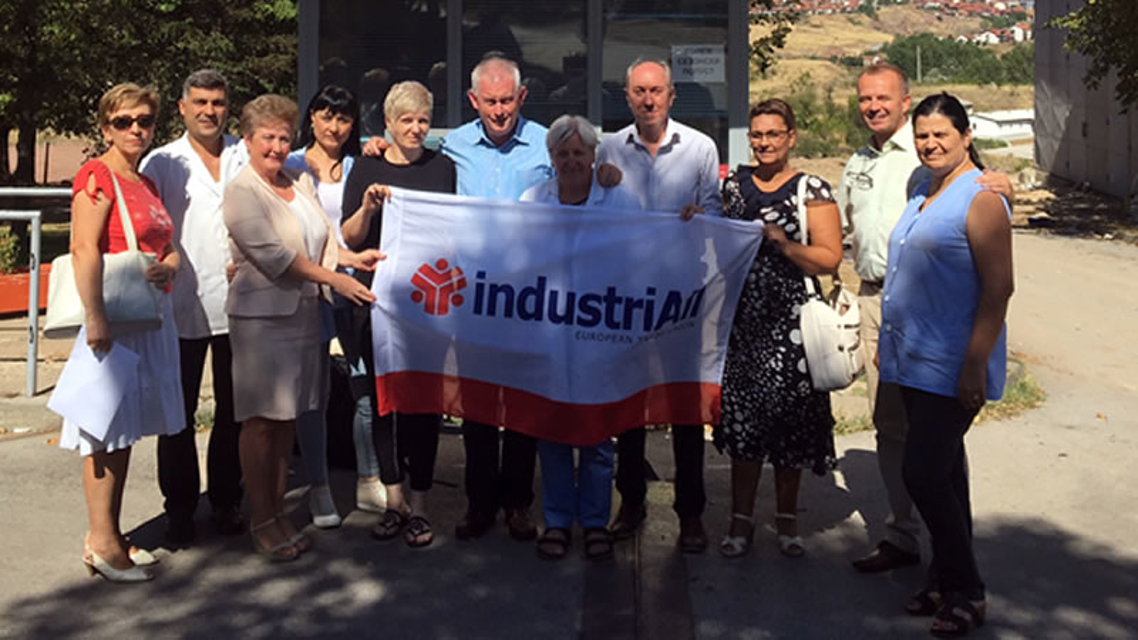 Hundreds of thousands of workers in Southeast Europe produce garments and shoes for Western brands at salaries that are often lower than those in China. IndustriAll Europe will take action, together with IndustriALL Global Union, to end exploitation of workers and achieve living wages through organising, building stronger unions and re-establishing industry-level collective bargaining in the coming years.

IndustriAll Europe is in close contact with affiliates in the affected countries; Macedonia, Serbia, Croatia, Bosnia and Herzegovina, Kosovo, Albania, Montenegro, Bulgaria and Romania. Several missions to these countries took place over the last months, alongside meetings with local civil society organisations, local employers and other stakeholders.

The rhythm of work at Bargala shoe factory in the industrial city of Shtip in eastern Macedonia is impressive. Workers, mostly women, cut leather and fabrics, stitch and glue pieces together, trim and finalize neat boots for winter collections. The pace is fast but the work must be of high quality, otherwise the brands using this supplier might move to the next factory.

Bargala’s clients include brands such as Deichmann, Next, Marks & Spencer, Zalando, Manfield and Kaufhof. Like most other brands and retailers, they do not make the products that are sold in their shops. Instead they use hundreds or thousands of supplier factories in Asia, and increasingly in Southeast Europe, pressing down prices to ensure comfortable profit margins, while sending auditors to the factories to avoid excessive exploitation of workers that could damage their image.

Still, workers’ wages are low at Bargala, as they are at other shoe and garment factories in Macedonia and other southeast European countries. A piece rate is used almost everywhere instead of an hourly wage, with the norm being very close to the minimum wage, which, in Macedonia is 9.800 denars or 156 euro per month in this sector.

Low wages mean that workers are often willing to do a considerable amount of overtime to make ends meet. The Bargala trade union committee says that with overtime including work on Saturdays, workers can reach 16,000 denars (255 euro) per month. However, this is still not enough to retain workers who leave for bigger cities, or move abroad, in search of a better living.
Bargala is one of the relatively few companies that has allowed workers to join a union. Unions report that employers are resisting unionisation, making organising an uphill battle.

Time for a change

“It is time to develop game-changing strategies for unions in the garment and footwear industries in Southeast Europe”, says industriAll Europe General Secretary, Luc Triangle, who recently visited unions and factories in Serbia, Macedonia, Albania, Kosovo and Bulgaria.

“A race to the bottom works for neither the citizens nor the economies of southeast European countries. On the contrary, we need to create domestic demand through the payment of living wages, which lead to economic growth and the creation of new jobs”; Triangle told the Garment and Footwear Round Table on 22 August in Belgrade, hosted by industriAll Europe and Serbian affiliates, and attended also by employers, academics and NGOs.
IndustriAll Europe is planning to target all southeast European countries, employing hundreds of thousands of garment and footwear workers, mostly toiling for a low salary very close to the minimum wage, with low levels of unionisation and collective bargaining, and frequent violations of trade union rights.

Bulgaria has the lowest minimum wage in the European Union, only 235 euro per month. As the European Trade Union Confederation (ETUC) reported recently, the pay gap between East and West in Europe is shocking. Bulgarian workers earn only 18% of the western EU15 average. In Romania, the figure is 21% and in Croatia 37%.

Brands in a key position

As already shown by the work done by the Global Trade Union Federation, IndustriALL Global Union, in Bangladesh and other Asian countries, the brands and retailers that source from Southeast European countries are in a key position to help alter the reality of these workers.
“Brands must pay their suppliers more, but we need mechanisms to make sure that that money is used to pay living wages to the workers”, says Luc Triangle.

A broad coalition of actors and stakeholders must be created, starting with the successful experiences from IndustriALL Global Union, which has launched an initiative with a brand group called ACT, describing it as “a ground-breaking agreement between global brands and retailers and trade unions to transform the garment and textile industry and achieve living wages for workers through industry-wide collective bargaining linked to purchasing practices.”

Rebuilding sectoral collective bargaining will be one of the challenges. Bulgarian textile unions reported that since 2008, employers have refused to negotiate national collective agreements. In 2011, Romania changed legislation to severely restrict national level bargaining.

Furthermore, IndustriALL Global Union’s global framework agreements (GFA) with the leading retailers H&M and Inditex (Zara) will be useful tools, as they cover three million workers throughout the supply chains, including those in Southeast Europe. In June, Bulgarian textile unions met with representatives of Inditex, whose suppliers employ 9,000 workers in the country.

“We are looking for win-win solutions for the workers, with good conditions, companies, with sustainable business, and governments, with economic growth and more equal societies”, concludes Triangle.