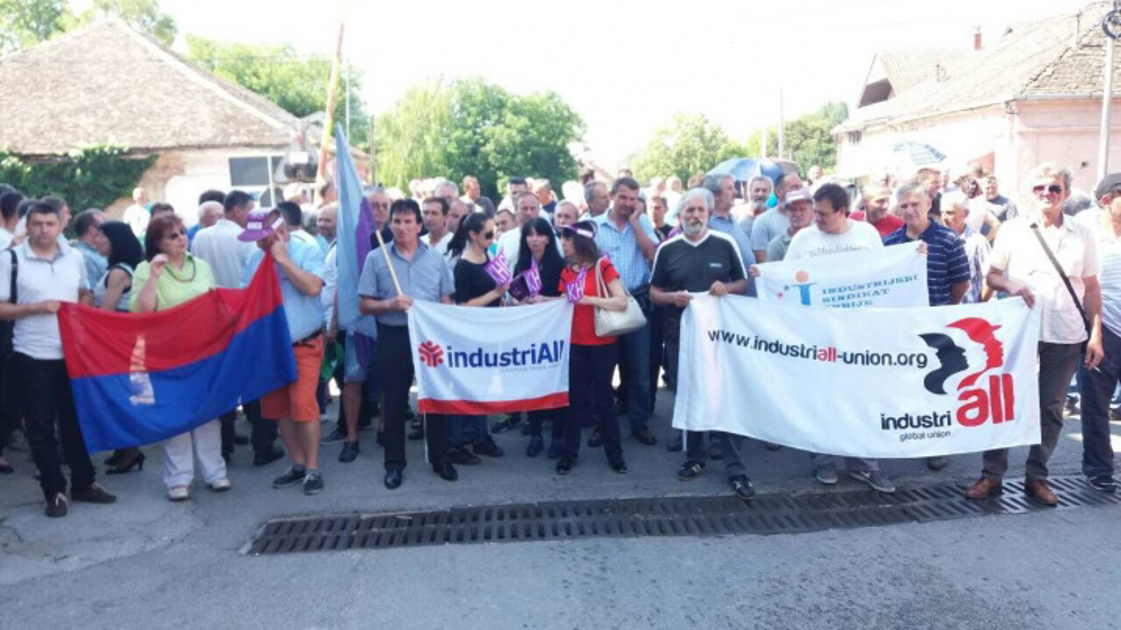 A delegation of trade unionists from Bulgaria, Romania and Hungary joined workers from the GOŠA factory in a blockade of the international Belgrade-Thessaloniki railway line and the road to the factory, where workers have been on strike for 100 days.

The workers at GOŠA and their families were put in an extreme living poverty situation, abandoned by their employer and ignored by their government. We will continue to fight to bring them justice

On 23 June, representatives from Metalicy (Bulgaria), FNS Solidaritatea Metal and FSLI Metal (Romania), VASAS (Hungary) and Industrijski Sindikat Srbije and the Autonomous Metalworkers’ Union of Serbia joined striking workers in an hour-long blockade at the factory in the town of Smederevska Palanka.

The workers have been on strike for 100 days, after not receiving their salary and benefits for 15 months. The workers at the factory are represented by three affiliates of IndustriALL Global and IndustriAll European Union, Industrijski Sindikat Srbije, the Autonomous Metalworkers’ Union of Serbia and Industry, Energy and Mining Workers’ Union - IER Nezavisnost, who are all taking action.

The GOŠA factory produces trams and railway carriages. It was one of the most important industrial plants in the former Yugoslavia. In 2007, the plant was privatized and sold to a Slovakian company, ŽOS.

ŽOS is heavily indebted, and owes the workers two million euros for 15 months of unpaid wages, and unpaid retirement and health insurance fund contributions. The company also owes three millions euros to the Serbian government. A buyer was recently found for the troubled company, and a deal was signed on 15 May which included a plan to pay the workers what was owed.

However, workers have not been paid, and the company claims the deal is no longer valid.

The problem is made worse by the fact that due to the sale, the workers have no clear negotiating partner. When it needs to motivate the workforce to complete an order, the company occasionally pays a small amount, such as 100 euros, every few months. This gives the workers false hope that things are being resolved. The situation is desperate for workers, with one worker hanging himself in the factory after not seeing any way out of the situation.

At the beginning of the strike, the general secretaries of IndustriALL Global and IndustriAll European Union and sent a joint letter to ŽOS, demanding that it pay what it owes.

“Solidary support of the colleagues from Hungary, Romania and Bulgaria, internationalized this strike, the first time this has happened in Serbia. We will do all we can to find a just solution for the workers of GOŠA, but it is necessary that state institutions get involved.”
Unions also hold Serbian state institutions – the labour ministry, the ministry of the economy and particularly the finance ministry – responsible for tolerating unpaid taxes by the company for more than a year. They feel that there is no political will to resolve the situation, which for an EU candidate state is serious.

IndustriALL assistant general secretary Kemal Özkan said:
“Ten years ago, ŽOS bought an important part of Serbia’s industrial heritage in a privatization deal. The company has failed, and has abandoned its workforce, who find themselves in a desperate situation.
“It is the responsibility of ŽOS, the new owners, and also the government of Serbia to find a just solution for the workers of the GOŠA railway factory. Their wages must be paid, and their future secured.
The international movement will continue to stand with the workers.”

IndustriAll Europe general secretary Luc Triangle said:
“When our affiliates joined the GOŠA workers in blockading the railway line, they reflected the solidarity of trade union members across Europe.
“The workers at GOŠA and their families were put in an extreme living poverty situation, abandoned by their employer and ignored by their government. We will continue to fight to bring them justice.”

The workers at GOŠA have pledged to blockade the railway line for several hours every day.

The delegation of metalworkers was attending a conference in Belgrade on the information and consultation process in the metal sector.